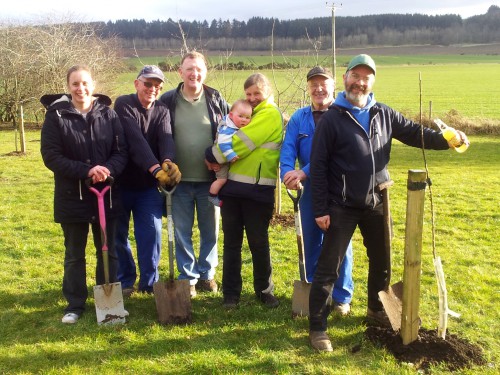 The sun shone Sunday (15th March) and it was quick work in the planting of an avenue of trees at Bede Way Tarves – to start a community Orchard Project.

Paul Johnston for PUT (Pitmedden, Udny Tarves Community Co-operative) has organised the PUT team to plant the avenue of Apple trees on the ground at the back of Bede way house, at the bottom of Manse Walk. “It was a happy band that turned up” Said Paul. “The group planted 14 Apple tree and 4 pear trees that cross with a mix of dessert eating, juice and cooking.

The planting was done by of Gordon Brown of Tarves Amenities and Bob Bamlett, Dave Horsley, Bob and Catriona McIntyre and daughter, Anna with her baby son Alex along with Paul Johnston.

“A Huge thanks is due to all for the help in getting the orchard started. The trees came from Pitmedden Garden where they had surplus trees from their new plantings and we took the opportunity to get the trees planted before the weather warmed up too much. We had hoped to plant in the autumn but the opportunity was too good to miss”

PUT which covers both Udny and Tarves have planted Trees in the old quarry at Pitmedden (Used previously as a compost centre) and are planning other sites around Pitmedden. “In Tarves, there are several places that might be suitable” said Paul Johnston. “Bede way open space is quite large and residents can still get access, kids can still play but there is room for trees.  There are other sties which might be considered as suitable for orchards trees, apple, pear, plums and others.”

The fruit from mature trees will be the subject of a community consultation on what they think the fruit could be used for. “We know there are people who want to do even use the apples for cider” said Paul. Local people will be asked to get involved and are encouraged also to support the apple orchard project at Pitmedden Gardens where there is a potential for the Tarves and Udny community orchards to support the Annual Harvest Apple Sunday.

To find out more click on the link at : Orchard