The Tarves Barthol Chapel News is published quarterly.  March, June, September and December.  The deadlines are 3 weeks before the start of the Month of publication for all adverts and articles. Urgent news items may be accommodated if editorial and production time permits. 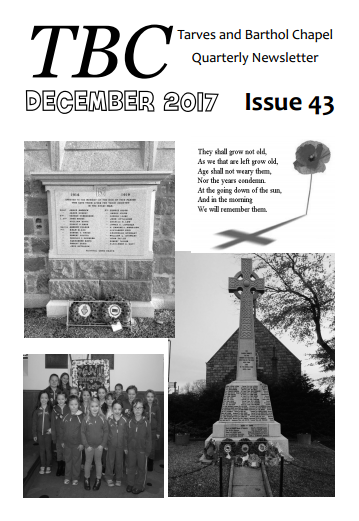 Some Previous editions are on our Archives page here:

Tarves Barthol Chapel News is the successor to the Kirk News, which was published by the Tarves Church of Scotland.  Back in 2014, the Kirk had found that this was a drain on their resources and the Chairman of the Kirk Session, David Presly approached, local resident and Councillor Paul Johnston with a view to starting a community Newsletter that might have a wider appeal, attract funding and support to replace it.

A meeting was called and a small group was formed.  The firt few editions were printed on a Riso or gestetner type machine via Pitmedden News in neighbouring Udny Parish. Their support was vital as this was the key to making the newsletter financially possible.  The editor was the late Moira Allan and the designer was Chris York.  Both their huge contributions to the Newsletter is acknowledged by the Community of Tarves.

Since 2011 the newsletter has been printed by Pitmedden, Udny, Tarves Community Cooperative, (PUT) who took over the printing of both community newsletters when they acquired a modern digital printer with financial support from Udny Community Trust.

A strong principle of the newsletter was that it should be delivered to every home in the village and every home in the surrounding parts of the parish if physically possible.  Copies were also available at local shops including Pitmedden where many people from the district call to get local convenience shopping.

This means that advertising in TBC news represents very good value for money for local businesses as they can virtually guarantee their advert being seen by every household.