HEALTH bosses have set up a public consultation, over the possible closure of a rural medical surgery. Tarves residents hit out after it was proposed the community’s medical facility could be shut down due to financial uncertainty. The restructuring of dispensing surgeries in the surrounding area, including stopping dispensing services at the Tarves surgery, has left the site in a financial lurch, according to community leaders. 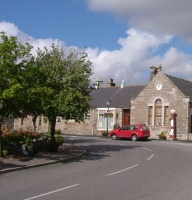 Aberdeenshire Councillor Paul Johnston today said the possible closure would have a negative effect on residents.
“The pain of losing the Tarves surgery would be very real locally,” he said.

Cllr Johnston added: “I hope that the public engagement meeting in August can explain what can be done.

“I doubt people will blame the doctors for any possible closure as the loss of the dispensing will have savagely’
altered the finances of running their surgeries.”

A spokeswoman for NHS Grampian said: “No decision has been made by NHS Grampian concerning the Tarves surgery. NHS Grampian is in the process of carrying out a review of primary care health services in the Haddo locality.

“This aims to assess what is available to the local population seeking to ensure good quality and accessible services,”